Counsels from the Holy Mountain – By Elder Ephraim of Arizona (Softcover) 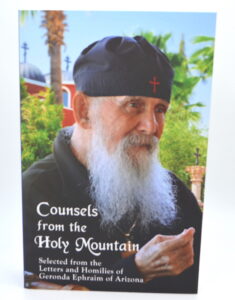 The Holy Mountain of Athos is an ancient community of Orthodox Christian monks in Greece that has been a beacon of sanctity throughout the centuries. Its unbroken chain of saints has preserved the wisdom and traditions of the Holy Fathers intact. From this sacred lineage comes Geronda Ephraim of Arizona (+2019), one of the most beloved contemporary spiritual fathers of the Holy Orthodox Christian Church. A disciple of Saint Joseph the Hesychast (+1959) and an inheritor of his grace, Geronda Ephraim was instrumental in the spiritual revival of the Holy Mountain, re-establishing the 2,000-year-old core Christian tradition of noetic prayer and hesychasm—the spiritual inner stillness in which one finds God. Coming to the New World in 1980, he founded seventeen monasteries in North America over the next three decades and was the geronda (spiritual leader) of sixteen monasteries in Greece, as well as the spiritual father of innumerable souls around the world. For sixty years he offered his treasured guidance, and he transformed the Orthodox Church in the Western Hemisphere.

This book is a treasury of personal counsels and homilies given by Geronda Ephraim that clearly delineate the patristic path to sanctification. He gives advice on every aspect of the spiritual struggle with insight acquired from his monastic life and from his experience as the spiritual father of countless clergy, monastics, and laypeople from around the world. By expertly intertwining stories from the Holy Mountain with teachings of the Holy Fathers, he weaves a divine garment for souls desiring to enter the wedding feast of the Lord. An invaluable contemporary classic for all who wish to live Christian spirituality in its fullness, Counsels from the Holy Mountain presents the choicest gems from the precious spiritual treasury of a contemporary saint.

There are no reviews yet.